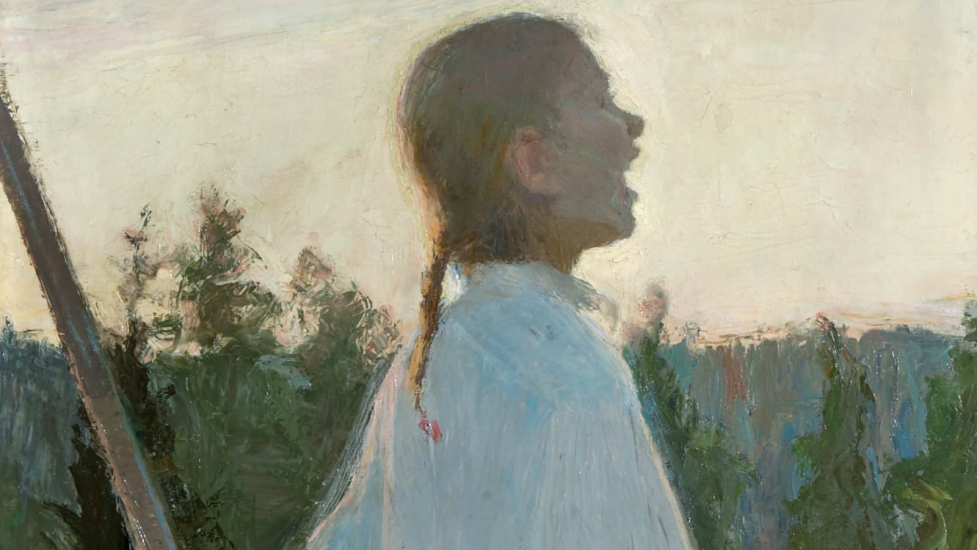 A brilliant painter and early modernist

The Finnish artist Ellen Thesleff (1869-1954) was taught to paint in the Realist style and went through a Symbolist phase, before maturing into a bold and fresh interpreter of colours and the potential of dissolved shapes in the early 20th century. She applied the palette of sunny Italy to the deep forests and lakes and landscapes of her Finnish childhood. An uncommonly dynamic combination!

“My life is dark as a lake at night, with a few bright points,” Ellen Thesleff wrote in 1897, after incorporating the life and light of Florence, Rome and Napels in her oeuvre. It was these bright points that she developed relentlessly over the next fifty years.

Ellen Thesleff was born in Helsinki on the 5th October 1869. She was the eldest daughter of five siblings. In 1872 the family moved up north to Kuopio where her father was a district engineer. Music-making was a frequent activity in the Thesleff home and everyone played a different instrument. In 1885 Ellen Thesleff, 16 years old, began to study art at Adolf von Becker’s private academy in Helsinki. She entered the Finnish Art Society Drawing School (today the Finnish Academy of Fine Arts) in Helsinki in 1887 and completed four terms. In the autumn of 1891, encouraged by her father, she made her first trip to Paris to continue her studies.

Ellen Thesleff’s painting Echo which she had painted during the summer of 1891, was accepted for the Finnish Artists’ Association’s exhibition. It was highly successful and was her breakthrough as an artist and brought the acknowledgement that both she and her family needed.

After her years of study Ellen Thesleff preferred to live in Italy and she worked there in the wintertime with her painting and also with graphic art and wood cuts. Summers were mostly spent at home in Finland. She visited Florence for the first time in 1894. She constantly returned to Italy, until her last visit in April, 1939. After that the Second World War put an end to her travels.

In 1933 she was offered a studio in Lallukka, the artists’ home in Helsinki, and she moved there with her sister Gerda. In 1939 she was given a state pension for artists. She continued to develop her style of painting, full of life and movement. She frequently exhibited her work until well into the 1940s but she became increasingly critical of her own paintings, and painted over them or destroyed many of them.

Ellen Thesleff was hit by a tram in a street in Helsinki in the autumn of 1952 and the neck of her femur was broken. She became a convalescent and died just over a year later on the 12th January 1954. She was a brilliant artist and an innovator in modern painting as well as in woodcutting techniques.

Guest curator Lena Holger is a writer and art historian and former senior curator at the Nationalmuseum in Stockholm. She has specialised in the oeuvre of Finnish artist Helene Schjerfbeck, writing several books and producing numerous exhibitions about her work, the first of which was in 1987 at Prince Eugen’s Waldemarsudde.