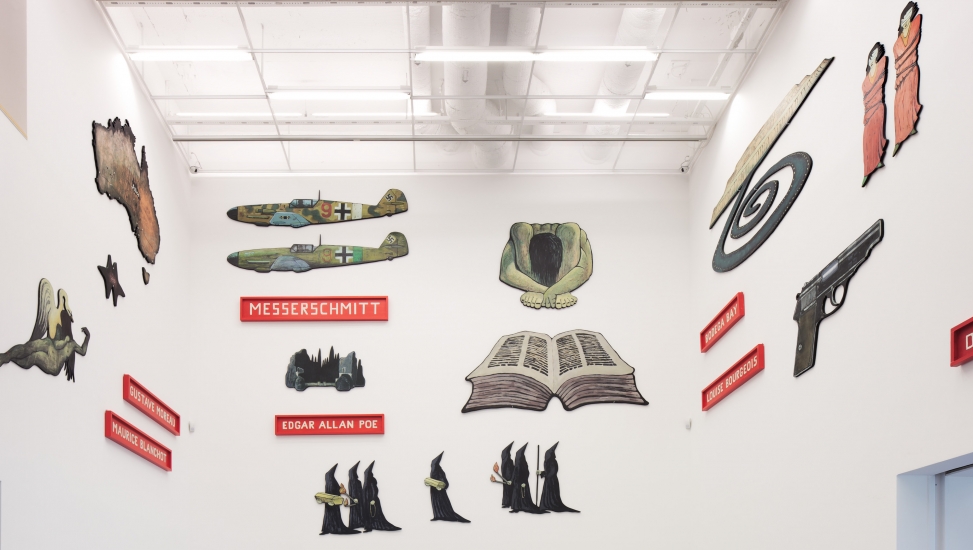 This is a development of his previous work The Eternal Return, with the familiar comic book characters from the Phantom, but with a more melancholic undercurrent. Both works were shown together for the first time at the Venice Biennale in 2009. Now, Paradise Lost IImeets the Swedish public for the first time at Sven-Harry’s (Art Museum).

The work consists of sawn-out figures, selected representations of more or less famous works and themes from the history of art and literature. Holbein’s Body of the Dead Christ, Smithson’s Spiral Jetty and William Blake’s Inferno are parts of the great jigsaw puzzle. The title is from John Milton’s epic poem that centres on the battle between God and a rebellious angel. The Universe is divided between two powers, good and evil.

The procession of monks bearing dead children is an incantation of the world such as it is –and expresses a longing for a lost paradise. This particular section of the work inspired the choreographer Lotta Melin to create a performance with strongly ritualistic elements.

The performance, La Buena Muerta, premièred at the Venice Biennale in 2009 and has been shown since then at the Nordic House in Torshavn on the Faroe Islands. Now, it will be presented in a new, adapted version both outdoors in Vasaparken and inside Sven-Harry’s (Art Museum) in connection with the preview and at the opening of the exhibition on 2 June. Together with La Buena Muerta, Jan Håfström’s Paradise Lost II begins to approach the Gesamtkunstwerk he has been moving towards.