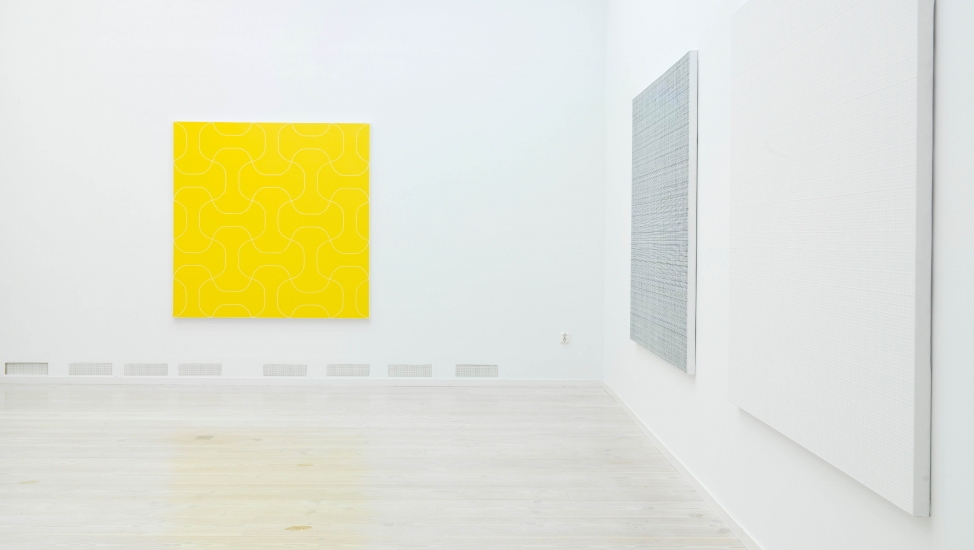 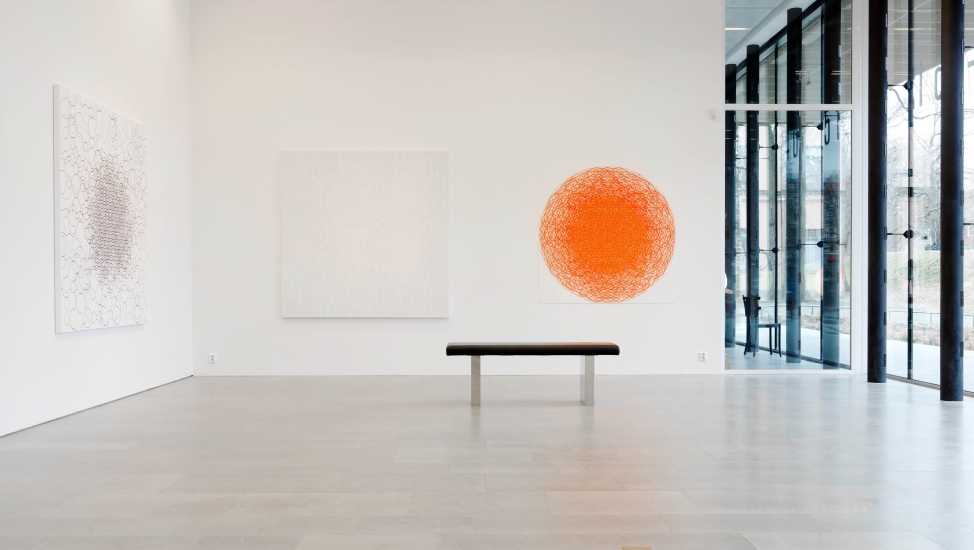 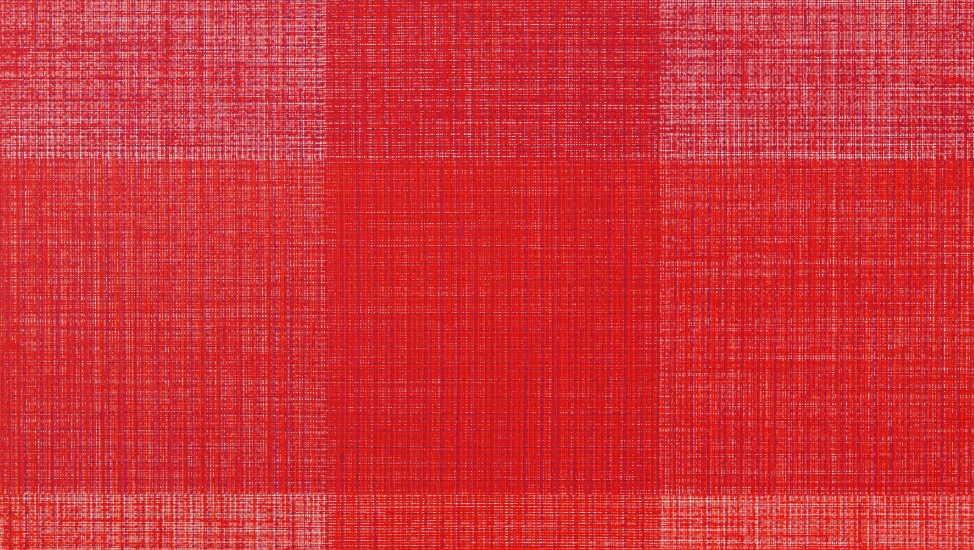 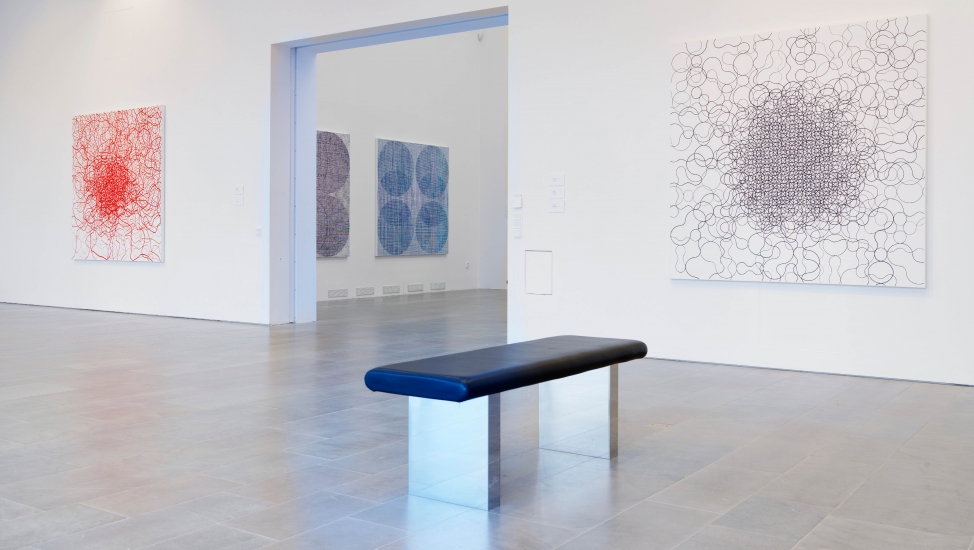 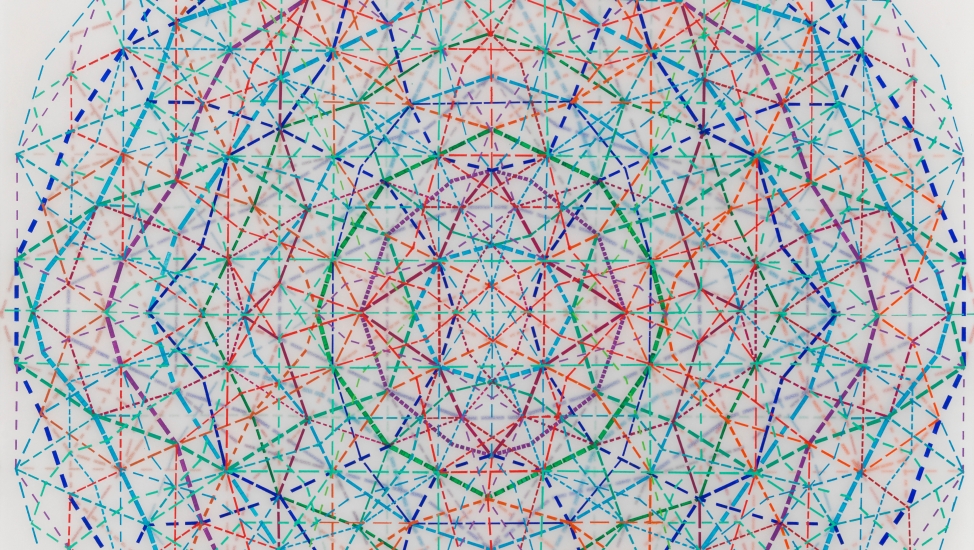 Where a line is to begin and end

Visiting Sonja Larsson at the old school in Årsta where she has her studio. Up on the hill, the snow lies pristine, the sky is blue and the studio building is flooded with light, both indoors and out. If we were to hold a snowflake under a magnifying glass, we would see an image not unlike the paintings hanging on her studio walls. The difference is that the myriad of snow crystals here all look the same, as they did the year before and as they will the next year, whereas that which awaits us in the studio has an unpredictable dynamic.

The first thing that catches my eye in there is a huge, red “four-leafed clover” that I once saw in an exhibition but don’t recognise now because it has gained so much body since it was last shown. The play of lines has grown denser, with a volume that raises it from the painted surface. This transformation tells of Sonja Larsson’s relationship to her own works, a dialogue that is ongoing, with no end. When a work reaches its saturation point, the conversation simply moves to the next canvas or sheet of acrylic glass.

She describes her method: Each line in the tight mesh requires her to guide the masking tape, a task that must demand unimaginable patience, and where most of the work is torn off and discarded before the result appears in its fragile purity.

Her driving force, she says, is the pleasure she feels every day as she approaches the studio, the pleasure in picking up the thread from the previous day’s dialogue with her materials. A vital part of her oeuvre consists of perceiving rhythms, harmonies and strains of melody beyond the sticky balls of masking tape, while remaining aware that the result does not spring from a pre-calculated system but from what happens to the image when it is liberated from the next layer of tape. Surprise is the factor that makes the effort enjoyable.

Looking at these paintings, our conversation easily progresses to music, especially music that includes a large or small portion of improvisation, a kind of improvisation that embraces the musician and creates a new entity of the player and what is played. Keith Jarrett’s strings of notes come close to the play of lines in the paintings, not just as an end result but as a road towards what finally meets the viewer and the listener.

Could Keith Jarrett play the Köln Concert identically a second or third time? None of us believe he could, just as it would be impossible to create identical copies of these paintings.

One decision is made at the start: Where a line is to begin and end. This saves the paintings from chaos. The artist takes control of the rhythmic grid that prevents the play of lines from turning cannibalistic and self-destructive.

Just as music cannot do without silence, this visual music depends on the empty spaces. We can catch our breath and rest our gaze before the rhythm recaptures them and moves the experience onwards.

The discipline that is nevertheless involved in the improvised and mutual effort generates a regularity and repetition in these pauses. Discovering this, the artist inverts her reading of the image and lets the ”silent” parts speak – or even sing. A delicate bell shape takes over the surface painted in different shades of white. The plane is now filled with a minimalist and discreet, repetitive rhythm as a point of departure for entirely new visual conquests. Whiteness and silence are the state of potential.